What structures make up the knee? 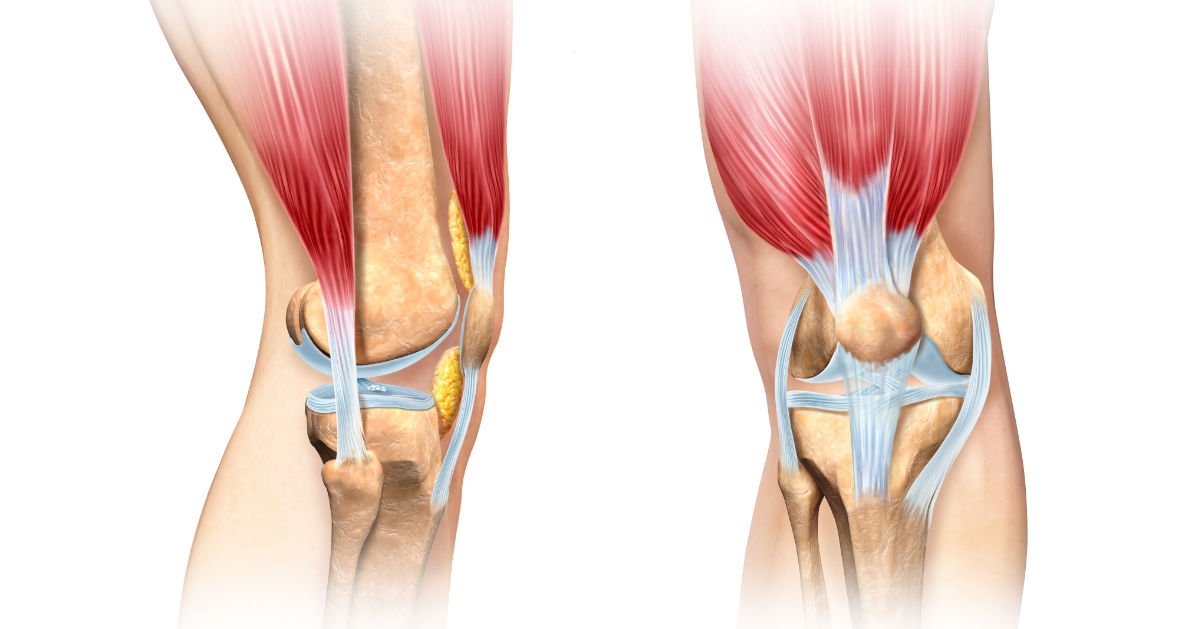 The knee is a complex and critical joint. When it works in cooperation with the hip and ankle joints, it makes it possible for us to walk and run. The knee can often be a site of injuries and dysfunction because of the nature of the demands from the body that it has to meet. The knee has to be stable enough to take our weight, even when we land with momentum, as in running and jumping. It also has to be mobile enough to allow us to place our feet and pivot as we do in tennis and basketball. Many sports ask a lot from this critical joint. Let’s take a closer look at the knee joint.

Bones in the knee

There are three bones that could be considered part of the knee joint:

Joints at the knee

The joint that we generally think of as the knee joint is the place where the femur, the long bone of the thigh, meets the tibia, the larger of the two lower leg bones. This joint is called either the femorotibial joint or the tibiofemoral joint. It’s a hinge joint, so it primarily does uni-axial movement, but keep reading to learn about the exceptions to this.

We also have a second joint which could be considered part of the knee joint. This is where the patella, our knee cap bone, meets the femur. That joint is called the patellofemoral joint and it is a gliding joint. Two flat areas of the patella glide along the condyles of the femur to create this joint.

Muscles, ligaments, and other structures at the knee

There are a number of muscles, ligaments, and other structures that are important for supporting the knee joint in its function.

Let’s start by taking a look at the muscles that cross the knee joint.

Each of these ligaments allows or restricts movement at the knee joint in different ways:

On the lateral side of the knee joint we have another important structure that contributes to knee stability: the iliotibial band (IT band). The IT band is a long section of ligamentous fascia that connects the hip to the knee. Among other functions, it helps prevent too much lateral or anterior movement at the knee joint when we’re walking or running.

We also have a strong ligament that helps hold the patella in place where it connects to the femur. The patellar ligament is formed when the four quadriceps muscles (rectus femoris, vastus lateralis, vastus intermedius, and vastus medialis) merge to form a common tendon just before they attach to the tibia.

Movements at the knee

Because the femorotibial joint functions primarily as a hinge joint, its main movements are flexion and extension of the lower leg. However, when it is flexed between 30 and 90 degrees, the knee can rotate, both medially and laterally, a small amount. When the knee is flexed between 30 and 90 degrees, it can rotate medially up to about 10 degrees and laterally up to about 45 degrees. When the movements of the hip, knee, and ankle are combined, it allows us to pick up our legs and feet and place them, so we can walk and run.

The knee joint is an especially important joint for our most basic functional movement, walking. While the demands that we place on the knee can make it vulnerable to injury and dysfunction, its unique shape and actions also allow us to move in a wide range of ways. The knee joint works with other joints in the body to make it possible for us to participate in activities from gymnastics to soccer to high jumping.

The Lateral Hip Muscles In Movement